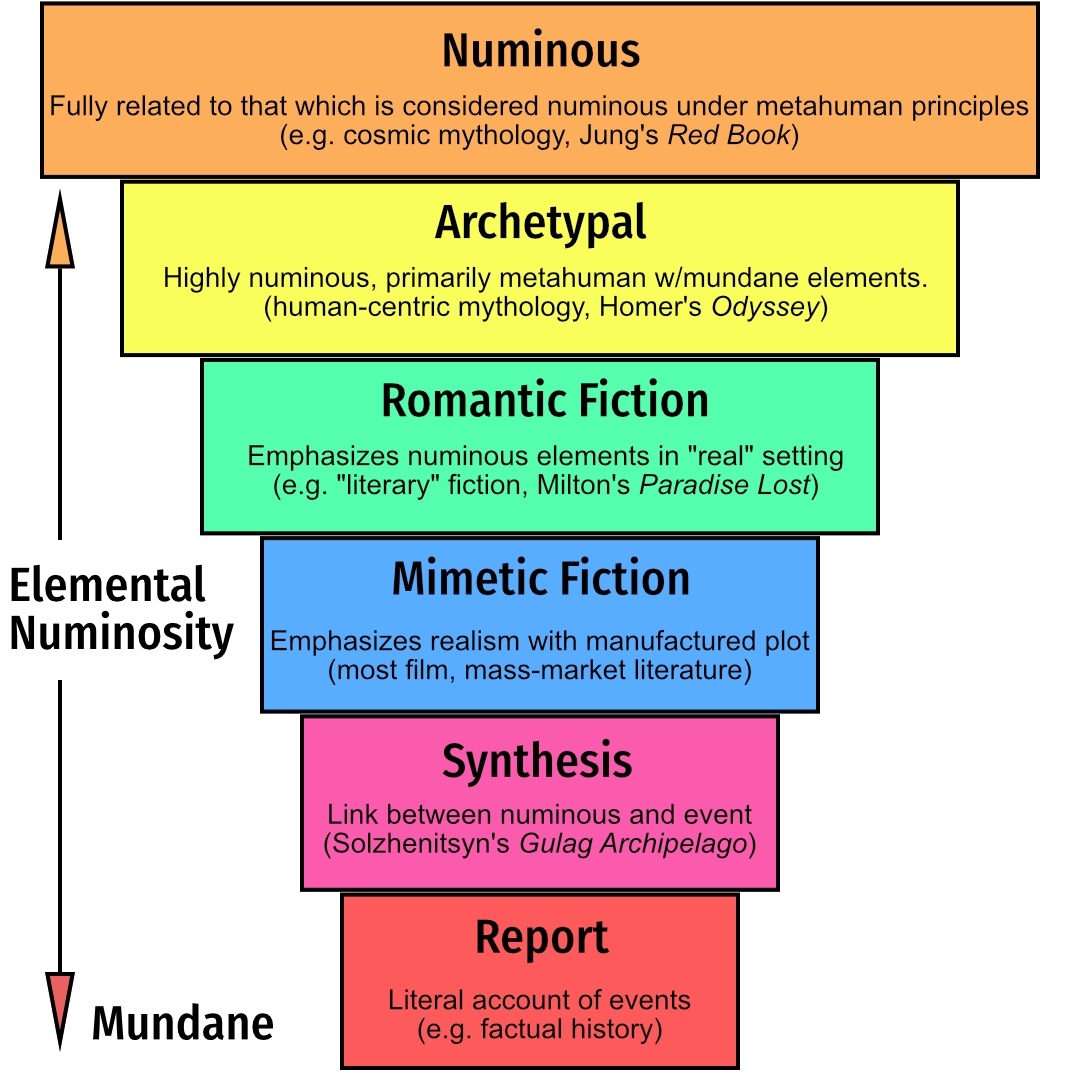 Hypothesis: Literature serves to address questions of beyond human scope.

From this I derive the term metahuman: the Greek term meta, as applied in English, means roughly “transcendent” or “about” in the sense that “metacognition” is the ability to think about thinking.

In this sense, we can call literature metahuman; the focal point of literature is that which is beyond a standard human. As a function of the human experience, the metahuman is an attempt by humans to reflect on humans.

It would probably be correct to apply this term to certain attempts at philosophy and psychology, and their application more broadly. Jung’s theory of psychoanalysis, with its focus on the collective unconscious and archetypes, could be described under this definition as a metahuman approach to psychology.

The metahuman theory of literature relies in part on the work of Jung and other archetypal critics, like Joseph Campbell.

Of particular interest is Jung’s theory of the numinous.

A numen is a spiritual or divine force; the term dates back to the animist Romans, who believed in supernatural power within inanimate objects.

Jung’s theory largely secularizes the notion of numinosity to something of psychological interest; that is to say that it is what contains emotional or aesthetic value similar to (but distinct from) the Romantics’ perception of the sublime.

The metahuman theory of literature centers on the numinous contained within fiction.

The metahuman theory of literature argues that the purpose of all literature is to convey a link between the numinous and the mundane (worldly, real, base experiential).

There is a distinction between two forms of numinosity:

Numinosity is strictly the perceived value drawn from a work. It is possible to interject numinosity where none is intended.

For instance, a scholar studying a historical work may find in it some special greater meaning or have an experience of the sublime as a result of connecting facts together in an overarching framework. A scientist who discovers something may find emotional valence in their work as they enter the unknown from the comfortable known. We can see this in the apocryphal story of Archimedes shouting “Eureka!” after discovering the relationship between the displacement of water and density.

When the construction of numinosity is within the recipient of information, rather than a deliberate attempt to construe said numinosity, this does not in and of itself create a numinous work. We call these works mundane, as they are centered on things perceived as real or worldly.

Rather, the metahuman theory of literature states that literature forms when there is a deliberate effort to create numinosity within a text.

We call this elemental numinosity, as it consists of an author or creator instilling numen into an endeavor, rather than the creation of numinosity by a receptive party.

We consider the numinous to be metahuman.

Our definition of the metahuman as that which is beyond human is that numinosity is shared across diverse human experiences.

This is not necessarily universal, but it is shared broadly. For instance, the crucifix has a numinous value to the Christian believer, and even nonbelievers who have familiarity with and attention for the Christian tradition, but not to those who are entirely unfamiliar with its nature or who are desensitized to it.

There are six clades of writing that we use to assess these points: report, synthesis, mimetic fiction, romantic fiction, archetypal writing, and numinous writing.

It is also worth noting that the clades do not correspond to total numinosity within a work, but merely the style in which the numinosity is in the foreground or background of a work. Philosophers may present their work in a synthesis, but also provide elemental numinosity beyond that found in a fictional work. The clades are then a measure of form rather than execution.

Report and synthesis distinguish themselves by focusing on mundane events.

A report is not metahuman, and is deliberately not so. It is an account of facts with no attempt to provide analysis other than material causal factors.

Many historical works (primary and secondary) attempt to be reports. This is considered the proper historical method, since then the recipient is permitted to draw their conclusions based on the evidence rather than having the numen hidden within the events defined for them.

Science, likewise, focuses its efforts on the report. The numinous element of discovery is independent from the facts that undergird it.

Synthesis occurs when there is an attempt to blend the numinous with a work whose focus is on the mundane.

Aleksandr Solzhenitsyn’s Gulag Archipelago is an example of one such synthesis. While a history of the Soviet gulag, it seeks to assign metaphysical meaning and practical valence to the atrocities that Solzhenitsyn and his compatriots suffered under.

Synthesis is valuable for giving a context to lived experiences. It is metahuman to the extent that it seeks to provide meaning for those events to all people, or else a significant portion of people, but it is not metahuman in focus.

Synthesis can also occur when real events are fictionalized, either in pursuit of a narrative or in deliberate attempts to speculate on the past. These stories take place on the boundary between synthesis and mimetic fiction, and may cross the threshold from synthesis to fiction depending on the authorial decisions regarding known and unknown events.

In fiction, the metahuman element is present as commentary. Whether this is from authorial intent or readers’ reception is irrelevant: stories focusing on fictional characters draw upon patterns and symbolic elements that reside in the realm of the numinous.

Mimetic literature focuses on mundane subjects, but is a work of fiction.

This alone suffices to classify the work as metahuman; that its focus is not on real human experience but the greater human condition.

In fact, mimetic fiction could in theory be psychologically real to an extent that mundane events cannot be. Because the events of a story fall entirely within the focus of the storyteller and audience, the ability to convey a particular meaning is purchased at the expense of truth.

There is some room for fiction which does not seek faithful replication of reality to be mimetic. The easiest examples of this would be speculative fiction which seeks to create a plausible reality that follows the known rules of science, or which has created a logical framework for rules alternative to those of the mundane world.

In this case the distinction falls to a judgment between authorial intent and reader response. One important question that would define this boundary is whether the story’s deviations from reality are because of convention, or whether the work is an allegory or deliberate exploration of concepts.

In the former case, the work could classify as mimetic. Because it seeks to reproduce a familiar form, or the deviations from the form provide mundane interest rather than a focus on numen, the work is focused on the potential mundane.

In the latter case, the focus on numen within an alternative reality classifies the work as romantic.

Romantic fiction focuses on numinous elements over mundane elements, but still keeps a focus on things with a connection to reality.

The distinction between romantic and mimetic fiction in the metahuman framework is that romantic fiction embraces the role of the numinous surrounding the mundane.

The purposes for this vary, as it may occur deliberately or accidentally, but the fundamental role of romantic fiction is to engage with ideas that hold a particular numen but which would not be encountered within reality.

Works like The Sorrows of Young Werther, which is definitively within the Romantic literary movement, may be classified as mimetic if they follow entirely conceivable events based on mundane experiential reality.

It is the injection of the supernatural allegory or a focus on psychological or spiritual numen which marks the boundary between mimetic and romantic fiction under the metahuman definition.

For this reason, philosophical and psychological works, like Dostoevsky’s Notes from the Underground or Kundera’s The Unbearable Lightness of Being can be interpreted as romantic fiction in the metahuman framework despite mundane subjects.

These works focus primarily on the metahuman rather than the mundane.

The defining factor here is the emphasis on subjects that bear numinosity.

These are heroic figures, but they are more than mere heroes. They are demigods and gods, bearers of numen beyond that intrinsic to humans.

These are manifestations of archetypes, the objects of numen. Incomprehensibly complex and inscrutable, the mysterious elements of the archetypes give them special meaning as examinations of the human condition.

Ancient mythology is replete with examples of archetypal elements; the earliest stories have shared patterns manifest in distinctive manners: these are flood stories, stories of burial and rebirth from the underworld.

Archetypal works play with these themes, incorporating them as the central pieces of narratives.

Dreams often take on these archetypal qualities, presenting representations of concepts and themes that deal with the numen.

One level greater of numinosity leads to numinous works, works of spiritual significance. Like religious texts focused on esoteric mysteries and the numinous work deals specifically and exclusively with numen, leaving worldly matters behind entirely.

Literature exists as a confrontation with the numen. By combining realism with the greater meaning that humanity is immersed in–the metahuman–it serves to meet with greater questions and seek deeper answers than one can find in the natural world.

Skip back to main navigation